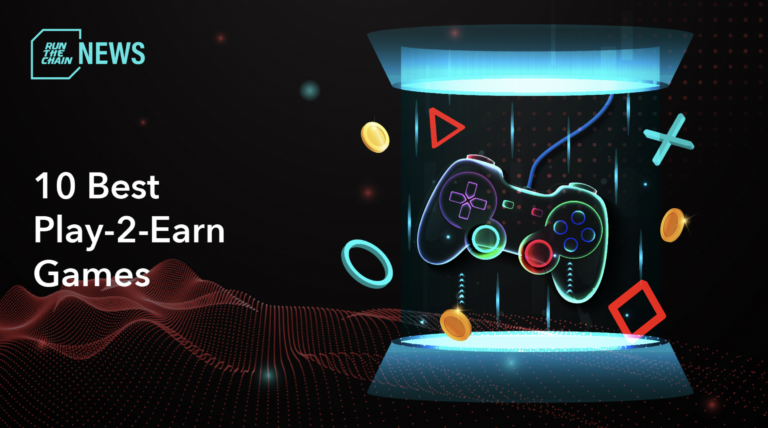 Play-to-earn games generally involve playing games to earn cryptos. They require some skill or competitive element, and the prize pool is usually determined by the number of people playing the game.

Some crypto games allow players to trade their in-game items for other assets, such as cryptocurrencies or fiat currencies. That gives players a lot more flexibility when it comes to earning rewards.

If you’re interested in making a passive income from play-to-earn games, here is a list of 10 of the best ones you can  choose from:

Splinterlands is a play-to-earn game that allows players to use digital monsters to battle each other in strategic summoned card battles. The game combines the best of fantasy gaming with the excitement of digital collectibles and card trading.

Players can earn rewards by playing games and trading cards on digital marketplaces. The game is decentralized and ensures that all player data is safe and transparent.

Decentraland is a virtual world where you can earn real cryptocurrency by playing games, exploring new worlds, and discovering hidden treasures. The game is built on the Ethereum blockchain, so all transactions are transparent and secure. And best of all, anyone can participate – you don’t need to be a tech expert to get started.

In Decentraland, you can own virtual land and build whatever you want on it. You can also buy and sell virtual assets with other players. No central authority can control what you do or take away the land.

Cryptokitties is a blockchain game that allows players to purchase, collect, breed, and sell digital cats. Developed by Axiom Zen, it was the first blockchain game to become popular, with over $12 million worth of Ethereum cryptocurrency traded in its first month. The game is built on the Ethereum network and uses smart contracts to represent each cat as a non-fungible token (NFT). Imagine a game where you could breed, collect, and train creatures called Axies while also earning cryptocurrency rewards. These Axies would have unique stats and skills, and you could pit them against other players’ Axies in battles to win prizes.

Additionally, Axie infinity allows you to buy, sell, or trade your Axies with other players using an in-game marketplace. In addition to breeding and battling Axies, users can earn AXS by staking it on the game’s decentralized network, which helps to power the game.

Gods Unchained features a unique, provably fair gameplay system that ensures all players have an equal chance of winning.  It also allows players to earn rewards through $GODS tokens, which can be used to purchase in-game items or withdraw real-world cash.

The concept for playing Etheremon is simple: players use their computer or mobile device to catch virtual creatures (Ether Monsters), which they can train and evolve. As they progress through the game, they’ll be able to earn rewards in the form of ETH.

SoG is the first web3-based mobile trading card game ever made. It combines the best trading card game (TCG) functionalities with arcade-style features. The game also has an in-game economy, where players can use the in-game currency, BitCrystals, to purchase new cards and other items. Upland is set in a virtual world based on the real world, and players can use their virtual currency to buy and sell virtual property. The game also features an auction system that allows players to bid on properties for sale. Competitors aim to earn as much money as possible by buying, selling, and trading virtual property.

Sorare is an NFT-based collectible fantasy football game released in 2019. The digital cards used on the Sorare platform are NFTs. Players can trade their cards with other players in the game. Gamers seek to build a team of world-class footballers and compete against other teams in online tournaments.

Alien Worlds is a blockchain-based game that allows players to earn Trilium (TLM) by mining, staking, and trading.  Players can explore different planets, mine for resources, and build their bases in the game. Players aim to earn as much TLM as possible.

These are just a few examples of blockchain games that are currently available. With the advancements in blockchain technology, we can expect even more innovative and exciting games to be released.

In conclusion, play-to-earn games offer a new level of engagement and financial potential for players. By allowing players to own and trade in-game assets, they have the ability to turn their gaming hobby into a source of income. However, it’s important to remember that these games can also have risks, and players should be mindful of potential scams and fraud. As with any investment, it’s crucial to do your research and understand the risks before diving in. But for those willing to take the risk, play-to-earn games offer an exciting new frontier in the world of gaming.