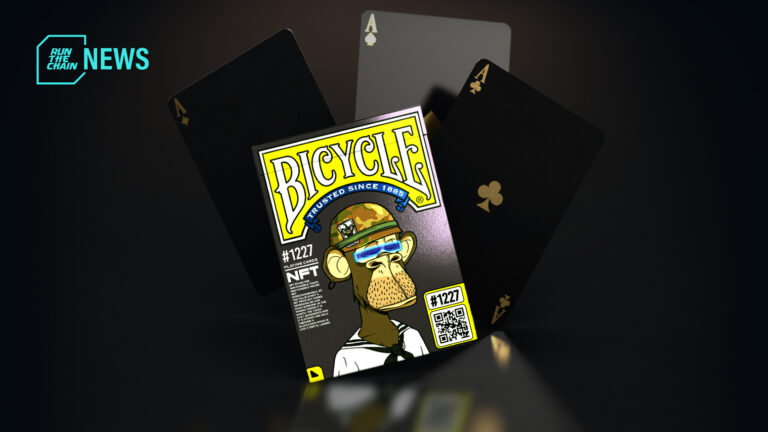 Established playing card brand Bicycle bought a Bored Ape Yacht Club NFT for nearly $187,000 and will sell decks of playing cards based on the Ape. The brand is also eager to work with fellow Ape owners to make more cards.

The 137-year-old playing card brand is amongst the latest to be part of the Bored Ape Yacht Club, an Ethereum NFT community that has attracted many celebrities and brand owners.

Bicycle Playing Cards, established in the 1880s now under parent company Cartamundi, announced their purchase of a Bored Ape NFT with plans to create and sell physical playing cards based on the Ape artwork. Bicycle also plans to collaborate with other Ape owners to create more NFT-themed decks.

“It’s communities like the Bored Ape Yacht Club that are shaping the future of the internet and the future of Web3,” said Cartamundi Global VP of Brand Commercialization Masha Ievseieva. “The holders that are part of the community, they are pioneering and are the most innovative in the space.”

Bicycle’s purchase was made in June, with the card company acquiring Bored Ape #1227 for just a bit over 103 ETH – worth $187,000 at the time. As the Ape’s artwork features a joker playing card on a helmet worn by the Ape, in addition to a futuristic visor, Ievseieva chose the attributes to symbolize the brand’s ambitions to move to Web3.

The Ape-themed playing cards are slated for physical release next year – with the Bored Ape on not only the packaging but also on individual cards in the deck. Ievseieva plans the deck to be available to the general public but says the brand may release exclusive decks for fellow Bored Ape owners.

Last year, Bicycle showed its first steps in embracing NFTs with the release of its collection of NFTs, where artists imagine what playing cards would look like in the future. Holders of the collection are eligible to receive a limited-edition deck of physical playing cards, which is aimed to be a move to bring the legacy brand and its fans into Web3.

“It’s actually a natural progression of the brand, because what we want to do is bridge tradition with innovation,” continues Ievseieva.  “NFTs are becoming part of our daily lives, and we want to make sure that we bring our community into this future.”

Ownership of a Bored Ape NFT automatically grants the holder permissive rights to create derivative artwork and products and to even sell them to the public. In using a Bored Ape image, no official licensing agreement is done with its creator, Yuga Labs. Bored Ape’s commercial rights policy ”has led to a lot of creative projects in our community, many of which have been successfully monetized,” says the NFT creators.

Many Ape owners have used the NFT artwork as virtual-world avatars, a status symbol, with some even taking the IP to create and sell their own products. Some have created metaverse bands, fast food restaurants, alcohol and marijuana packaging, toys, and even apparel. In August, hip hop artists Eminem and Snoop Dogg used their own Apes for their performance in this year’s MTV Video Music Awards.

Before Bicycle, beverage brand Arizona Iced Tea had purchased a Bored Ape in 2021 to use in an advertising campaign. However, the brand soon violated Yuga Labs’ terms of use – with Arizona’s unauthorised use of the Bored Ape Yacht Club logo.