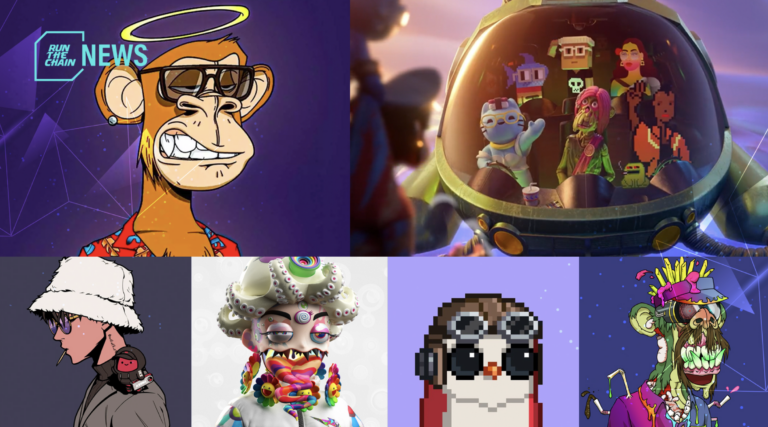 Find out which 10 NFTs accumulated the most trading volume in 2022 – crypto’s most tumultuous year to date.

2022 marked a year of significant change for NFTs.

While many were banking on NFTs as a way to make big profits throughout the first few months of the year, trading volume had proportionally dropped upon market crisis after market crisis. Prices also dramatically dropped, leaving the most well-known collection, the Bored Ape Yacht Club, in record low floor prices.

However, some projects have withstood the test of rapidly shifting market conditions.

Thanks to CryptoSlam, we’ve looked over the data, and compiled 2022’s top traded NFT collections between January 20th until December 20th, 2022. We’ve also included on-chain secondary sales for both new and old projects – and the funds generated from initial mints from 2022.

It’s important to note that CryptoSlam filters out sales data where there’s suspected price manipulation through wash trading: a method of trading at artificially inflated prices between multiple wallets owned and managed by a given user (or a group). Wash trading is a popular method for users to manipulate the chances for trading rewards for their own gain, but is not in any way a method of organic price nor trading action.

Without further ado, let’s get started.

Monster battler game Axie Infinity was 2021’s top NFT project, but in 2022 its play-to-earn economy struggled. Axie was popular for its token rewards, accumulating billions of dollars worth of trading in its heyday, but it has now gone quite stagnant.

While it was reported that Axie racked up over $126 million in NFT trades within January, things went for a steep decline – as CryptoSlam data shows that $1.5 million worth of NFTs had been traded in November.

Axie Infinity still managed to make the top 10 of traded NFTs in 2022, despite suffering from massive drops in trading action over the year’s harsh economic conditions.

Web3 fantasy soccer game Sorare racked in approximately $318 million in trading volume so far this year. Sorare also enjoyed steady sales in 2021, and continued to do so in 2022, toppling over well-hyped sports NFT NBA Top Shot.

Sorare’s $318 million trading volume was calculated from trades only from Sorare’s soccer NFT platform – however if combined with their league-specific MLB and NBA platforms, there’s not quite much difference as Sorare’s baseball and basketball equivalents haven’t quite taken off yet.

With ambitious plans like doing more in the entertainment space, enlisting musician and producer Pharrell Williams to be brand ambassador to help accelerate the project. Doodles is also preparing for a part two – a Doodles 2 built for the metaverse.

Tallying up to over $391 million in secondary sales this year, Doodles trading peaked in January – with a massive $122 million recorded. Not to mention, Doodles has $54 million in VC funding to bring its plans to revolutionise the entertainment space – but only time will tell if they can succeed.

Although launched in 2017, the Ethereum-based PFP collection CryptoPunks still enjoyed a well-traded – and eventful year.

In February, CryptoPunk was sold for $23.7 million worth of ETH. Then CryptoPunks creator LarvaLabs sold its IP rights to Yuga Labs, maker of Bored Ape Yacht Club in March. As a result, Yuga Labs made it possible for owners to obtain IP commercialisation rights for their Punks, and have been in efforts to make CryptoPunks gain art world cred by donating them to museums.

Despite Punks being free to mint at its launch five years ago, they still managed to be popular – racking in massive trading amounts.

Yet another stylised PFP collection, the anime-inspired collaboration between RTFKT (a Web3 studio owned by Nike) and globally-acclaimed artist Takashi Murakami managed to rack up $600 million of trading volume since its launch in late 2021.

RTFKT had also continued efforts into delivering benefits to CloneX holders – such as NFT airdrops – but it still hasn’t saved CloneX from this year’s declining prices and demands. RTFKT still has a few big plans up their sleeves in the near future for CloneX holders, which may be a convincing reason to keep trading CloneX NFTs.

Within two days of its launch, these 10,000 pixelated owl avatars soon generated $280 million worth of minting and trading.

Launched by tech entrepreneur Kevin Rose, famous for his Web3 artist collective startup Proof, the Moonbirds avatar collection was launched to build a cohesive community revolving around artists. Trading frequency has since subsided, but Proof has managed to raise $50 million to expand Proof’s token and NFT offerings. Will this revitalise the Moonbirds collection?

Azuki has earned the title of being the most traded amongst 2022’s new NFT offerings (which is not a spin-off of an existing NFT).

Launched in January, Azuki has accumulated around $850 million worth of trading since, despite experiencing a stumble in May’s market crash.

Alongside Azuki are Beanz (its “sidekick” NFTs that were airdropped free to Azuki holders) also managed to rack up another $233 million in trading volume themselves. On top of its companion NFTs, Azuki has high hopes to bring physical products to its brand, which can possibly increase demand in the future.

Its initial mint brought $561 million to Yuga Labs within 24 hours of launch, and then soon brought OpenSea to its record high of trading volume on the platform to date – right before the crypto market crash.

NFT traders on Otherside buy Otherdeeds – a plot of land within Yuga Lab’s upcoming metaverse. Yuga Labs held a testing opportunity for the game in July, and is in the process of planning more demo experiences as development for Otherside continues. It’s unclear as to when users can use their Otherdeeds – but at least it’s a good flex point.

There’s twice as many Mutant Apes out there, and are traded more frequently in comparison to the original Bored Apes – but  still  have managed to be approximately $0.43 billion shy of their predecessors in trading volume this year.

In March, Mutant Ape owners were granted a place in the ApeCoin drop, and were also able to claim a free Otherdeed in April – driving up prices of assets within the ApeVerse.

Hype surrounding the Bored Ape Yacht Club has managed to keep the Apes in their position, not to mention these NFTs going mainstream through celebrity endorsements, branding, and product marketing.

Despite Ape prices plummeting a lot since its peak in April, the Apes still remain at the top of the NFT trading game.